How to make a simple tomato risotto 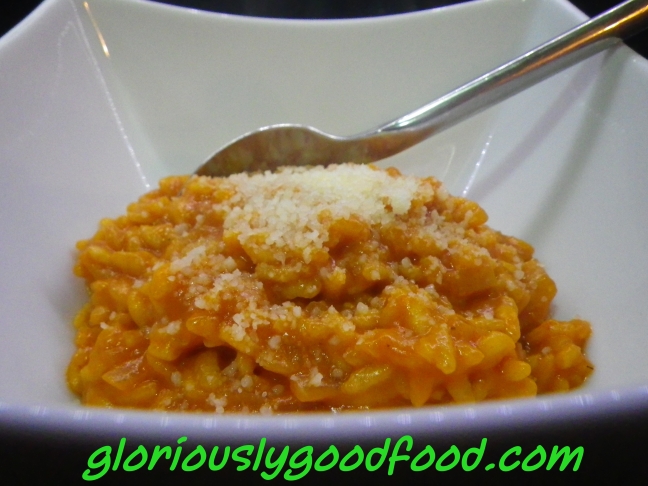 TIP: Quantities of tomato passata and vegetable stock can be adjusted, as described above, to suit different tastes; in any case, the actual quantity of stock used will depend on a number of factors: the exact rice used, the ambient humidity, the temperature you’re cooking at, etc. As long as you add the stock a little bit at a time and don’t add any more until all the liquid has been absorbed, you will be fine.

Melt the butter and oil in a non-stick saucepan or stockpot, on a low heat.

Add the finely chopped onion and soften, still on a low heat, until translucent (this should take a couple of minutes), then stir in the sundried tomato purée.

Add the rice and stir it in for up to a minute, to allow the flavours to infuse the rice grains.

Add the passata and stir.

Cook on a low heat, stirring regularly but gently (don’t over-stir as you may break the rice grains) until the passata has almost completely absorbed into the rice, then add a small amount of stock (50-100ml at a time, at most).

Continue to cook on a low heat, stirring regularly to make sure the risotto doesn’t stick/burn to the base of the pan, until the stock has almost completely absorbed into the rice, then add another small amount of stock.

Repeat this process until the rice is cooked; this can take up to 40 mins (check cooking times on the pack of rice), but it will depend on lots of factors, so let your eyes and taste-buds guide you: you need the rice to be a sticky, thick risotto. The rice needs to be soft but still have a distinct rice-like and slightly ‘al dente’ consistency (i.e. not have disintegrated/turned mushy).

Stir a knob of butter in at the end of the cooking time, along with a couple of tablespoons of grated parmesan. Serve immediately and provide additional grated parmesan to be sprinkled onto each individual portion.

TIP: If you use the risotto as an ingredient in Supplì, you will need it to be drier than it would be if you were eating it on its own. Also, in that case, do not add the final knob of butter or the parmesan.

Suppli come from Rome and the Lazio region.  These delicious Breaded Risotto Balls are known as Arancini throughout many other parts of Italy and are originally from Sicily.

One of the main differences between Supplì and Arancini is that Supplì tend to have cheese in the centre.  The very traditional Roman Supplì are made with a meat & tomato risotto and have mozzarella in the centre.

Suppli are exquisite Italian morsels.  You can eat them as starters (that’s their original place in a meal) or as finger-food at a buffet, as a main meal with a salad, or as a perfect TV dinner, to name but a few ways to enjoy these versatile little risotto balls!  Supplì are usually served in traditional “Pizzerie” (Pizza Restaurants) as ‘antipasti’ (starters).  They can be made with almost any risotto base.

For about a year, I ran a business (Cini Ltd), making and selling these delicious morsels.  I put together a short video to show you a glimpse of what a day in the Cini Suppli kitchen used to look like (hours of work condensed into under 2 mins of video!)

The Roman/Lazio “Supplì al Telefono” (called that way because, when cut in half, the two halves are on a ‘telephone wire’ to each other via the stringy melted cheese) tend to be more oval-shaped, whereas “Arancini” can have round, oval or tear-drop shapes. I tend to make them all into small, round morsels as they are easier to shape and easier to eat as a snack or appetiser.  They make fabulous party food!

Supplì are not hugely difficult to make, though they do require patience as they take time.  It may take a few attempts before you get them right, but it’s worth persevering.  If you really don’t want to make them yourself, do make sure you try them if you go to Rome.  Or ask for Arancini in other parts of southern Italy, especially Naples and Sicily.

The recipe below is for small, round vegetarian – tomato and mozzarella – ones (traditional Roman ones are larger and oval, and are made with a minced meat and tomato risotto base – similar to a bolognese sauce in a risotto – rather than a simple tomato and onion risotto base).

TIP:  If you were making ordinary risotto, you would leave it quite ‘wet’, but for the Supplì you need to ensure you don’t have excess liquid.  Also, bear in mind that the rice will become drier as it cools down and absorbs the last of the moisture.

TIP:  place the breadcrumbs onto a large, deep food-serving/oven tray.  You won’t use all the breadcrumbs but you’ll need an ample supply of them in order to thoroughly coat the individual supplì

TIP: I like to use latex/vinyl gloves when rolling the Supplì – it stops my hands from turning orange and also allows the fat from the risotto to stay on the rice rather than absorb into my hands, which makes it easier to coat the rice balls in flour.  I also like to have a bowl of lukewarm water and a towel handy so that I can wash excess breadcrumbs from my hands between batches.
TIP: You can either repeat this process until all your rice balls are ready to fry or you can do them in batches of 3-4 and roll the next batch while you’re frying the previous one; the latter method is faster, but if you’re nervous about timings/burning the supplì, do the two steps separately.

I mentioned recently I’d been busy with setting up my Supplì-making business: Cini Ltd.
suppli

I’ve been really busy over the past few days!  I now have:

A website & blog
A facebook page
A twitter account
A pinterest account
A Google+ page
A LinkedIn Company page
suppli
If you love Italian food, love risotto, love cheese, and especially if you have tried my Supplì,  please follow any or all of the above.  I hope that my Supplì will be a HUGE phenomenon UK-wide and, why not, even worldwide!

I know that they taste & look great.  I’ve had brilliant feedback, including from an independent retailer (I can’t say too much at this stage, but we’re looking to do a store trial with tasters in the autumn, all being well!).  Now I just need to raise awareness of these exquisite Italian morsels 🙂  Any help greatly appreciated!

From the Countryside and beyond...

Patrons of the Pit

Finding the sweets in everyday life.